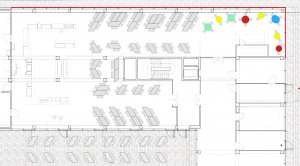 glassfacade and furnishing for the café of the German Federal Parliament at Schadowstraße 4, Berlin
glassfacade: silkscreen with transparent colors on glass, 353 x 5062 cmc


The artwork Café Schadow examines the connection between the history of architecture and the history of democracy.
The German Federal government has traditionally embraced the transparency and openness of modern architecture to reflect the democracy, closeness to citizens, future orientation, transparency and modesty. When one passes through the Schadowstraße/ Dorotheenstraße area today, one will notice how the large window panes on the ground level of surrounding buildings have been covered by matt film, hiding themselves from the view of passers-by. This can even be seen in the Federal Press Office (Bundespresseamt) opposite the site.

The design for the ground floor of the new Bundestag building envisages the following:

A transparent motif is printed along the entire length of the glass façade of the café and canteen, overlapping with the interior and exterior space. Drawing from the surrounding area of the Federal Press Office, motives from the Federal Picture Archives are used, with a focus on spaces of democracy in the Federal Republic and its constitution. These images overlap with the newly planned architecture. The artists own photographs, portraying the demolished architecture of GDR modernism, are combined in the work with the historic images. The motive, in a rastered format, consists of large dots which are only perceived as an image from a certain distance.
Inside, white parallelogram-shaped tables and round coloured glass tables will accommodate the overlapping views and the play of light and colour of the facade. The tables are mirrored: there are left- and right-angled tables that can be arranged as a group but not mixed.