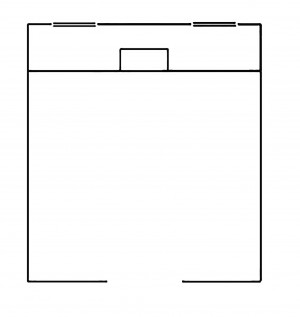 The work Adjoining Room extends the apartment by an additional room, which however remains locked. It consists of a wall, the uppermost third of which is a glass panel, situated before a wall of windows. The light above head height and the locked door suggest that there is an adjoining room, however the sandblasted glass makes it impossible to determine its size. The room in which you stand has become an antechamber to an inaccessible room lying beyond it.
Sandblasted glass, drywall, wood, paint, keyhole
1 light bulb in the centre of the ceiling of the front room
300 cm / 300 cm / 360 cm
1994